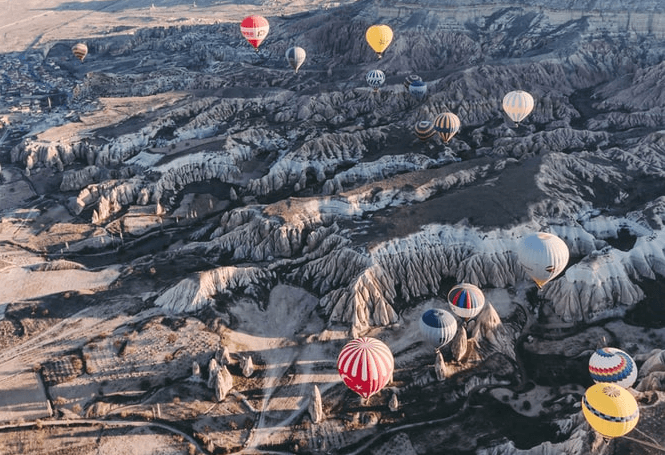 Turkey is a popular travel destinationthroughout the year. The country has an impressive past, is rich in culture and is home to some of the most important historical sites from the ancient Greeks. With a beautiful landscape, pristine beaches and bustling cities, Turkey is a great destination for any kind of holiday. Since the coup attempt of 2016 and because of political tensions, tourism has declined somewhat. However, not a lot has changed, and the country is still a safe, affordable destination.

Take Istanbul for instance, which is one of the most interesting mega cities in Europe - and of course, Asia. The two continents meet in the very centre of Istanbul with the Bosporus, a narrow natural strait, splitting it into one European and one Asian part. 15 million people live is this vibrant and historical place, and many of them cross from one side to the other via ferries or using one of the three available bridges.

There are not many cities with a history as remarkable as Istanbul. Founded 2600 years ago with the name Byzantium, this place served as a capital for three historic empires – the Roman Empire, the Byzantine Empire and the Ottoman Empire. As such, Istanbul is both a dynamic, modern city and a large archaeological site with countless remains from its past. Its historic area and many buildings were included in the UNESCO list of world heritage sights decades ago, shortly after the UNO began granting this title to important landmarks.

Travelling to Istanbul is easy as it is well connected by many international airlines. Turkish Airlines (TK), Condor (DE), TUIfly (X3) and many other low-cost airlines offer direct flights to Istanbul. By the way: regarding passenger rights, you don´t need to worry about travelling to Turkey as a non-EU country. If you are coming from within the EU, airlines are still bound to the EU Regulation on air passenger rights.

Holiday in Antalya and the Turkish Riviera

Antalya is the biggest town on the so-called Turkish Riviera and an important destination for tourists coming by plane. Thanks to a mild climate, the warm water of the Mediterranean and stunning landmarks, this region attracts millions of tourists each year. Some of the most famous archaeological sites from ancient Greece can be visited here, among them two of the Seven Wonders of the Ancient World: The ruins of the Mausoleum at Halicarnassus and the Temple of Artemis at Ephesus . Antalya itself is mostly known for its huge airport and a point of transit for other places in the region. But the city itself is also definitely worth a visit, especially if you are already nearby. Strolling along fragments of the ancient city wall into the old town is a great experience. From several points, you have an amazing panoramic view across this beautiful part of the city. You can gaze at the impressive skyline with old buildings and beautiful minarets of the many mosques dotted throughout the city.

The Yivliminare Mosque, for instance, is a breath-taking building from the 14 th century and looking across its famous 38-metre-high, fluted minaret you have a spectacular view of the Mediterranean coast. Also, the lower Düden waterfall is impressive to see as it pours down the cliffs of Antalya. There are many nice restaurants around this area as well, with a unique and relaxing atmosphere.

Things to do in Alanya and Side

If you are a beach-bum, Alanya is one of the best spots to go on the Turkish Riviera. Many Germans come here to spend their summer holidays and with over 10, 000 German emigrants, Alanya is also the region with the biggest permanent German population in Turkey. Alanya is known for great beaches and one of them can be found right in the centre of town. Cleopatra beach stands out with its fine white sand, crystal clear water and the pretty nearby cliffs. With a gorgeous old town and a laid-back atmosphere, spending time in this city guarantees a stress-free vacation.

Not far from Alanya you can visit Side. Thanks to the staggering number of ancient sights, this is a very special place. Side was founded about 3500 years ago and was an integral place in ancient Greece. You can visit the massive, well-preserved Amphitheatre which, during its active times, offered space for about 15,000 spectators. Nearby you can find the early Roman Temple of Dionysus with a beautifully restored fountain at its entrance. Side was a very modern city in Roman times, famous for its advanced water system. An aqueduct built at the end of the 2 nd century AD brought fresh water to the city, where it was distributed to city residents via many public fountains, baths, and cisterns. Wealthy citizens even had running water and sewer systems in their homes. Many remains of that complex water system can still be seen today, such as a special opening in the city walls where the pipe entered the town. Also, the remains of the Nymphaeum of Side, a large, ancient ornamental fountain, can be visited by those who want to learn more about how the ancient Greeks and Romans used to manage water systems completely without electricity, pumps, and pipes made of concrete, plastic or metal.