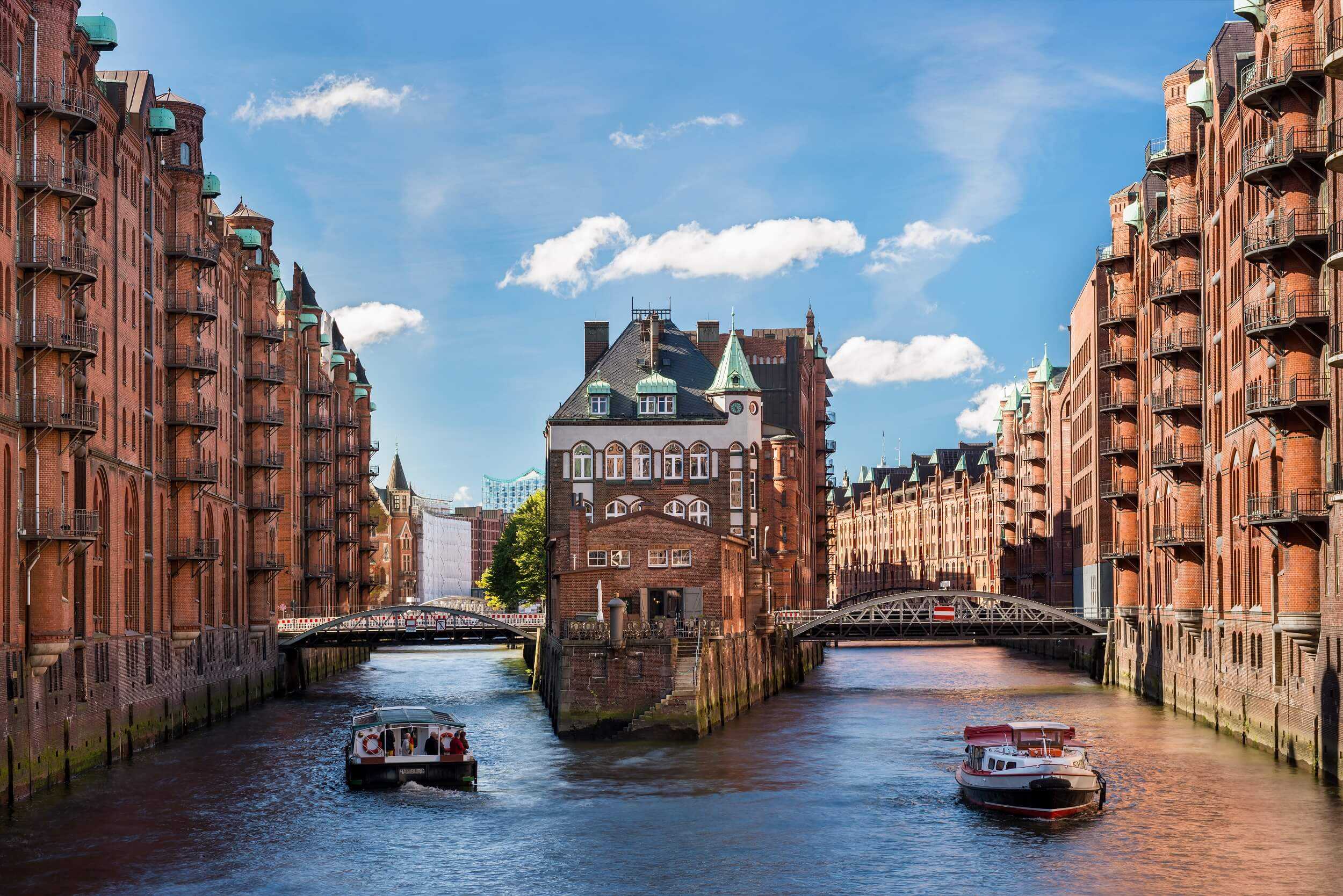 A trendy, yet traditional city built at the water

Hamburg is a city that surprises most of its visitors with its unexpected charm. Located at the Elbe river it is considered one of Europe’s top travel locations. It even made it into The New York Times´ list of 52 Places to Go in 2017. The just inaugurated Elbphilharmonie, a stunning modern concert hall construction, built on top of an old warehouse building is just the newest of the many attractions this city has to offer.

Hamburg provides a unique atmosphere you won´t find in other cities of this size. Before reaching the center, the Elbe splits into two big arms that surround a huge island. There, in close visual distance from the residential and center parts of town, massive port and dockyards create a somehow lovely industrial flair. Huge container vessels, small fishing boats, and ferries can be seen right from the riverside in the center. Water plays an important role in Hamburg and it´s no surprise that visits of the Fischmarkt Markets and the Landungsbrücken Piers with their lovely bars, booths, and restaurants are two of the most visited attractions.

With numerous canals and an inland lake right in the very heart of Hamburg (Alster), the Elbe´s waters reach out into many neighborhoods distant from the main river. As a result, Hamburg has more bridges of all kinds and sizes than any other European city. With a total count of 2486 bridges, Hamburg even beats Amsterdam (1200), London (850) and Venice (410).

Hamburg can be reached comfortably via Hamburg Airport (HAM), which is located in the north of the town and connected with metro and suburban trains. Reaching the mentioned famous waterfront in the center takes just about 30 minutes and the northern parts of Hamburg even less.

The distant Hannover Airport (HAJ) and Bremen Airport (BRE) are the only two alternatives if you come by plane. But thanks to high-speed train connections of just 75-90 minutes they are still an option to consider.

Hamburg Airport is a major hub for Germany´s two main airlines Lufthansa (LH) and Air Berlin (AB) but can also be reached via EasyJet (U2), Germanwings (4U) / Eurowings (EW), Ryanair (FR), Wizz (W6) and some other low-budget airlines.

While being well-connected, Hamburg Airport (HAJ) has some bad fame in terms of flight delays and flight cancellations which in the recent years were often caused by striking Lufthansa employees. Also, many flights coming from the south of Germany, Mallorca and Italy might take a bit longer than planned so it´s good to have some margin instead of traveling on a tight schedule.

Things to do when coming to Hamburg

Strolling around at the Elbe river is a must for all Hamburg travelers. The mentioned Landungsbrücken Piers and the Fischmarkt Market attract millions of visitors each year. According to local authorities, every weekend close to 70.000 people alone come to see the famous market criers, although the action takes place early in the morning. The market is open from 5 am to 9:30 am only. In spite of being called fish-market in German, sales booths for tropical fruits, flowers and all kinds of funny things have been core attractions of this place for decades.

Once the big fish-sale in the market-hall ends, it´s party time inside of this traditional building. There is live music every Sunday and a dancefloor bringing together morning-enthusiasts and nightlife-survivors. Hamburg´s nightlife districts St. Pauli and the Reeperbahn are just a stone´s throw away, so this is a natural place to go when clubs shut their doors in the early mornings. But St. Pauli and the Reeperbahn aren´t just good for going out late. Plenty of beautiful cafés, galleries, and alternative shops can be found as well and some locals say you will also get the best Turkish kebab there.

Hamburg´s newest attraction, the Elbphilharmonie concert hall is also definitely worth a visit, not just because of its stunning architecture but also because of its unique position. It is located in the Speicherstadt warehouse area, with buildings made of red clinker that are surrounded by water. This old warehouse complex is considered the biggest historic warehouse complex of its kind. Some of these buildings, which can be reached both from the land and from the water, are older than 100 years. Because of their beauty and historic importance, the UNESCO declared them a world cultural heritage in 2015. Hamburg is also a nice place for business travels as many of its attractions don´t need a lot of time to visit and can be reached quickly from every corner of the city.

Hamburg hosts more musicals than any other city on Europe´s mainland and comes third just after New York and London. Music lovers have plenty of venues to choose from, such as the Stage Operettenhaus, the Neue Flora, the Theater im Hafen, the Theater an der Elbe, the St. Pauli Theater, Schmidts Tivoli and the famous Delphi Showpalast.

There are also numerous music bars and pubs with live music. Some of the more popular places for smaller live concerts and jam sessions are the Kulturhaus 73, the Astra Stube, the Prinzenbar or the Cotton Club. But the scene is changing constantly and re-inventing itself as places close down and new ones open. Therefore it´s definitely a good idea to go with the flow and just to explore what´s going on at a particular day or weekend. The Szene Hamburg guide, heuteinhamburg.de or prinz.de are good sites with insider tips you might want to check out. If you don´t speak any German, Google Translate will surely do the job to help inform you about particular events.